Common Sense Media has made a name for itself among parents as a useful resource for vetting entertainment and technology in terms of its age-appropriateness. Now, the organization’s for-profit affiliate, Common Sense Networks, is taking inspiration from those kid-friendly recommendations with the launch of new streaming service called Sensical. The service offers age-appropriate, entertaining, and educational videos for children ages 2 through 10.

At launch, the free, ad-supported service includes over 15,000 hand-curated videos and over 50 topic-based channels for children to explore. And unlike other platforms, like Netflix or YouTube, Sensical doesn’t use algorithms to make content recommendations. Instead, kids are encouraged to follow their own interests and passions across over 50 topic-based channels. This includes things like Adventures, Animals, Arts & Crafts, Music, Science, Sports, Video Games, and other sorts of kid-friendly topics.

Kids can star these channels, or individual videos or series, in order to keep up with their favorite content in a dedicated Favorites section within the app.

Kids will see a selection of these channels based on their age, but the company is working to expand the channel lineup so there will be even more specific categories in the future. For example, instead of just “sports,” there could be channels like “soccer” or “gymnastics.” Instead of “Arts,” there could be “drawing” or “origami.” Instead of just “science,” it could include channels like “geography” or “robotics,” and so on. 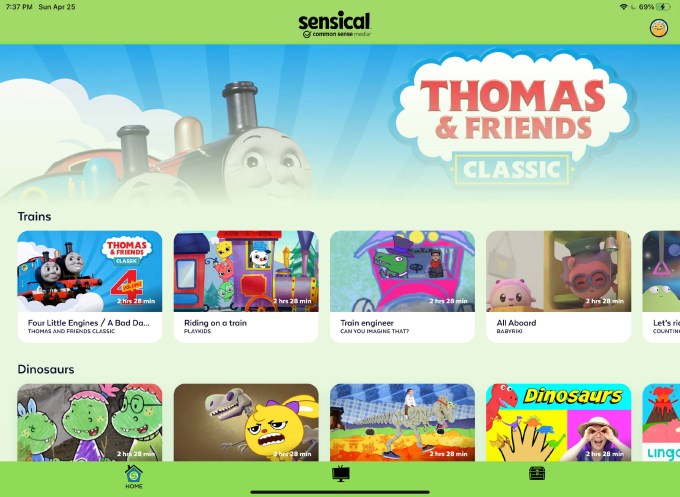 The app also features a Live TV section, which is programmed throughout the day with kid-friendly content so kids don’t have to browse to find something to quickly watch.

While other streaming services on the market offer kid-friendly content — as that’s a huge selling point for subscribers — it’s not always organized in a way that makes sense. Sometimes, all the content gets lumped into a general “Kids” category where videos for little kids are mixed in with content for older children. Sensical, meanwhile, curates the content recommendations into three different experiences, including preschool (2-4), little kids (5-7), and big kids (8-10).

What the child sees is based on how parents configure their profile. Plus, parents can use the service’s ParentZone in-app dashboard to set screen time limits, extend limits as needed, and view daily reports on what the child has watched.

The service’s best feature, however, is that the content is assured to be age-appropriate — even the ads.

This is possible because the curation approach Sensical takes, which is very different from YouTube Kids. YouTube’s app for kids leans on algorithms to filter out adult content from YouTube’s broader library, but the company doesn’t manually review all the videos it includes. It warns parents that some inappropriate content could slip through. (And it has). Common Sense Networks, meanwhile, says dozens of trained child development experts view, vet, and rate “every single frame of video” that goes live on its service using its proprietary IP and patent pending process. This system involves tagging content with specific child developmental benefits, too.

Sensical also vets its advertising, which is how the service is supported, with similar direct oversight. Its experts review the sponsor’s content to ensure it’s appropriate for children — an area that’s often overlooked on other services.

To fill its library, Common Sense Networks partnered with dozens of studios and distribution partners as well as digital-first creators.

The service abides by the U.S. children’s privacy laws (COPPA), and is certified by the kidSAFE Seal Program.

Having briefly toyed around with the mobile app, it appears Sensical works as described. If I had any complaints personally, it would only be that the experience could be dismissed as “baby stuff” by older kids approaching their tween years, due to the cute pictures and youthful iconography used in the app’s design. Kids in older age groups take issue with being treated as if they’re younger — and they take particular notice of anything that does so. The same complaint goes for the Live TV programming, which was clearly aimed at littler kids when we checked it out, despite testing the app as child profile whose age was set to “10.”

I also think it would be nice if there was a better way to track Favorite channels and see when they’re updated with new videos, as kids moving to Sensical from YouTube will want to “feel” like they’re still connected to new and fresh content, not a library. But Sensical isn’t YouTube. There’s a trade-off between hand-curation and timeliness, and Sensical is favoring the former.

Sensical had been first introduced this spring during a closed beta, but is now publicly available to stream across web and mobile on iOS, Android, Roku, Amazon Fire TV and Apple TV. This summer, it will expand to more distribution platforms, including VIZIO.